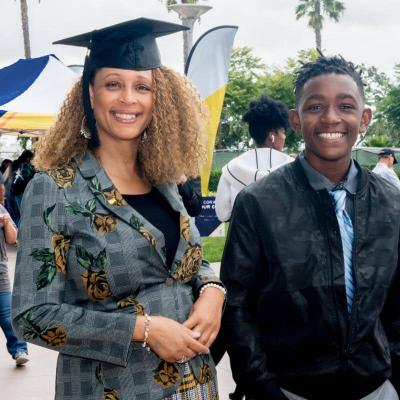 I chose Ashford* because it was online, which gave me the flexibility I needed to complete my degree. I had the freedom to study anywhere, any time. I could not have completed my degree any other way.

Math isn’t for everybody. Just ask Renata Falls-Jefferson. When the 46-year-old mom began her studies at Ashford University* in 2015, one of her greatest worries was passing the Algebra I and II courses required to earn a Bachelor of Arts in Business Administration.

“I had dreaded the classes because I was out of school so long and did not think that I would perform well,” Renata recalls.

It’s one equation she got wrong. In the end, what started as her biggest challenge became one of her greatest achievements as an online student.

“My favorite classes were Algebra I and II because they were the hardest,” she says. “I heavily relied on the tutoring chat and enjoyed how they worked with me until I understood how to solve the problem. I was impressed with the materials and techniques used to teach algebra. I felt a sense of accomplishment when I completed the courses with good grades.”

Graduating with high honors was a big confidence booster for Renata. She spent most of her career implementing new products and services in the telecom industry, but after 17 years as a project manager for the same firm, she was laid off at age 45. Although she previously earned certificates in project management and medical office management, a career counselor suggested Renata return to college to earn a bachelor’s degree as a way to demonstrate to potential employers that she was still trainable. However, it didn’t seem like an option.

Eventually Renata was hired for her current position, but she still wanted to pursue a college degree. When she learned that she could go to school online and receive a full tuition grant from her employer, Renata jumped at the opportunity.

“I chose Ashford because it was online, which gave me the flexibility I needed to complete my degree,” she says. “I had the freedom to study anywhere, any time. I could not have completed my degree any other way.”

Renata credits resources such as the Ashford Library and the Writing Center, which she relied on for each course, to help her through some of the more challenging assignments.

“Both were easy to use,” she notes. “I submitted every final paper to the Writing Center to use as a second pair of eyes, and the responses they provided ensured me that I understood the direction of the assignments.”

Additionally, she notes the instructors’ knowledge and encouragement as a key component of her success.

“I definitely received a quality education,” she adds. “Forbes School of Business and Technology is a recognized name internationally and respected in the business sector.”

Completing her degree has served as a source of inspiration for her 13-year-old son and her professional colleagues, but it also has enriched her life in many other ways.

“Earning a degree has helped my critical thinking skills and strategic planning ability,” she explains. “College has taught me how to research issues for factual information, which is meaningful in building trust with a client.”

Renata’s time at Ashford also has shaped the way she perceives the world in general.

“Understanding international economy makes me look at the world differently, and I now understand why certain issues are so important to people culturally and politically,” she says. “Most importantly, I learned to respect other people’s differences of opinion based on their personal backgrounds.”