Kandance Powell’s friends describe her as the person who jumps into the pool without checking the temperature.

“I just jump,” she exclaims.

That is how she has approached life, and now school. She trusts her instincts and is unafraid to try things, risk failure, or take a different, perhaps more scenic route. Now, she’s approaching earning her master’s degree from the University of Arizona Global Campus (UAGC).

The twists, turns, stops, and detours she took to arrive at college success perfectly reflect her outlook on life and willingness to take chances.

“When I graduated high school, I was accepted into the University of Auckland because I always wanted to go to New Zealand,” Kandance recalls about the very beginning of her college explorations.

However, her plans to experience Kiwi life came to a halt when her family learned that her mother had stage IV cancer and was not expected to live to her high school graduation.

Kandance’s gut told her she needed to stay close to home to help her family, so instead of traveling across the globe, she attended a nearby junior college and earned her associate degree. All the while, her mother continued her fight and made a full recovery, which could only be described as a miracle.

Her mother’s illness behind them, it was time for Kandance to spread her wings – or perhaps stretch her sea legs – as she moved away from home to attend California State University Monterey Bay and study oceanography. “I really loved ocean life,” she explains. “The water is still my happy place. It provides me with peace.”

As a newly independent 20-year-old, she hit another roadblock. This time, she admits, it was one she created herself. “It was my first time away from home,” she admits. “I did not put school first.”

She made the difficult decision to leave school and return to her hometown when her retail job arranged for her to transfer to a local store.

A Career to Move Her Forward

After several years working in a retail environment that even included a promotion, Kandance started to feel like she was going in circles, doing the same thing day after day. She was ready to explore her options.

“When I was 26, I started dating a Marine,” she says. “He asked me if I had ever thought about the military.”

She felt a spark, and at the age of 27, Kandance walked into an Army recruiting office.

“As soon as I walked in, the atmosphere, everything – I was like, ‘OK, I’m home,’” she remembers fondly.

Kandance jumped and found a future she was ready to work for, and work she did.

“I was overweight at the time, so I had to work my buns off to lose 30 pounds,” she explains. “It took me an entire year before I could actually get sworn in and leave for basic training.” 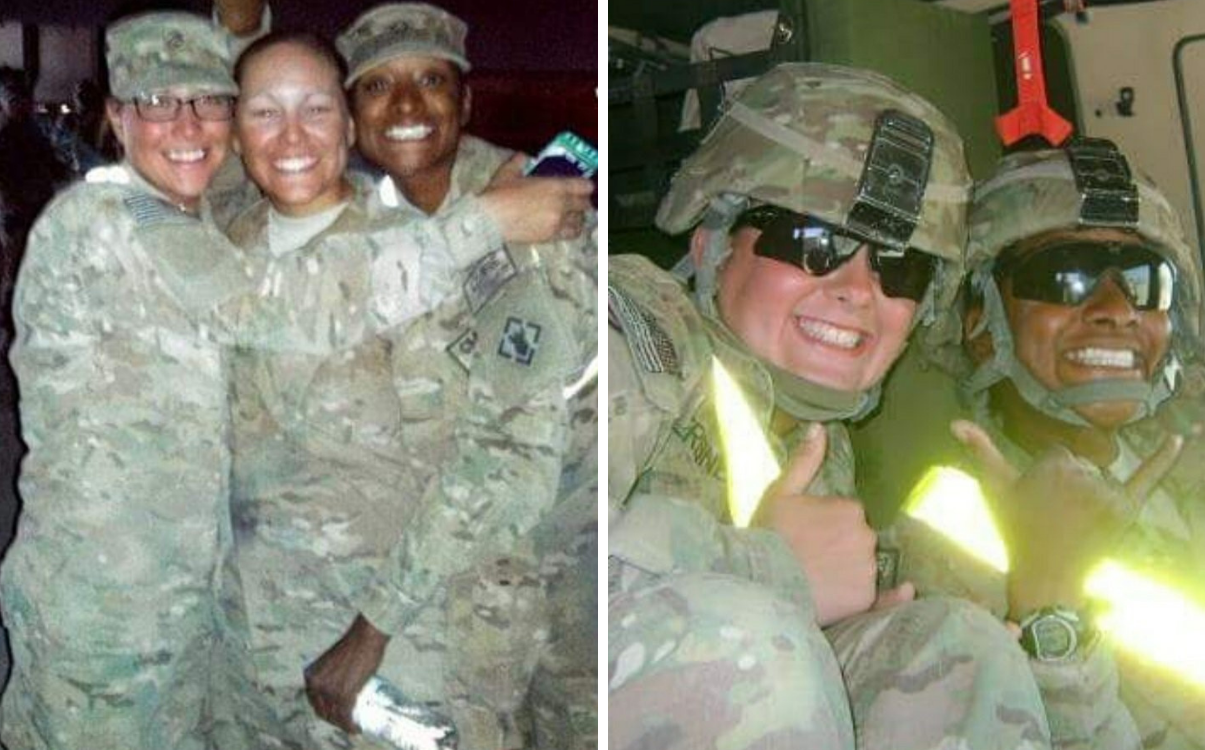 Left: Kandance heads back to the states following deployment. Right: Kandance prepares to head out on a mission in Afghanistan. She says that her favorite time in the military was her deployment because it was when she was really able to do her job and show her skills.

As a Heavy Equipment Operator in the U.S. Army, she had found her place, along with plenty of success, leading 30 convoys while deployed to Afghanistan and becoming the first female to go into a combat engineer unit at Fort Stewart when she returned from deployment.

Soon, Kandance received transfer orders, and while on her way, she took a sharp turn she wasn’t expecting. She was expecting.

After experiencing a series of injuries during her service and now about to become a mother, Kandance started her transition to civilian life.

“I miss it every day,” Kandance says of her time in the military.

Among the many things, she got from her service was a new goal for her future. As a pregnant soldier, she worked in an office. “Being in that role of our unit in human resources, I got to see a lot of how people shortcut,” she recalls. She noticed people letting personal biases getting in the way of their work, and she felt she had to be an advocate for fellow soldiers to help them accomplish their goals. She discovered a passion.

She would work toward becoming a human resources professional to help people reach their career goals, admittedly a big left turn from her oceanography goals.

Kandance knew she needed a degree. She saw an ad for Ashford* and decided to, once again, jump.

“Being a 100% disabled veteran, I had time,” she says. Even as a new mom, she was able to commit time to her goal, and perhaps most importantly, she was mentally ready for school now.

She enrolled in the Bachelor of Arts in Human Resources Management program, and aided by the consistent class schedule, she was able to quickly settle into a routine.

“Taking classes online has helped me greatly because I am a single mother who also cares for my nephew full-time while his mother’s at work,” she explains. “Online classes have allowed me to spend quality time with the children while gaining an outstanding education.” 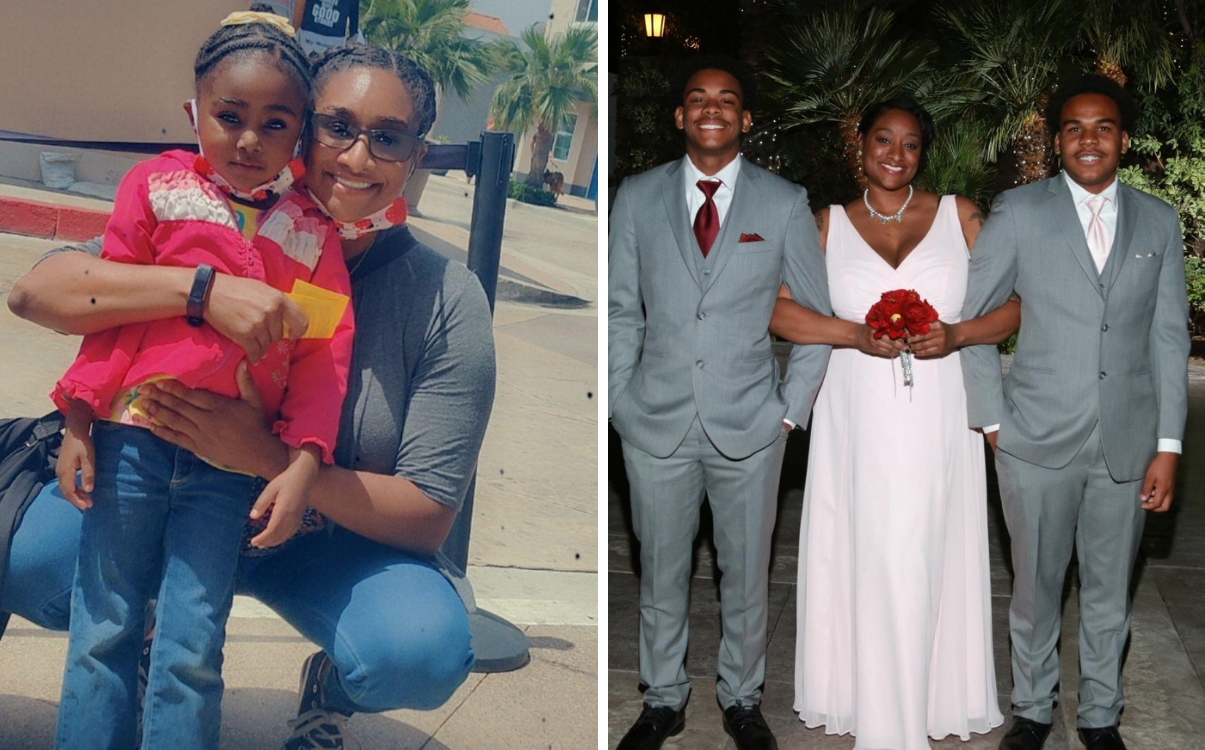 Left: Kandance with her daughter, who recently turned 5 and requested a big "bash" for her milestone birthday. Right: Kandance is escorted by her two nephews at her brother’s wedding.

Not only did she find her groove, she realized her potential as a student that she had not in her previous attempts, joining Sigma Beta Delta and Alpha Sigma Lambda as an undergraduate.

She even surprised herself by being the recipient of the Senior Project Scholarship from the Forbes School of Business and Technology® for her project covering the evolution of human resources in today’s work settings. When she heard the call for submissions, she asked herself an important question: Why not?

The Master of Her Own Path

Kandance completed her undergraduate degree with gusto in October of 2019 and started mulling over that same important question when presented with the option to continue to her Master of Human Resource Management. “A master’s was never in my mind,” she explains. “So, it wasn’t until toward the end of my bachelor’s degree program, I found out the VA would cover my master’s degree program.”

Kandance’s time as student has been pretty smooth, she admits, but she also credits the flexibility of the program for her ability to stay on-track through technical issues and continue to be a dedicated mother.

“Outside of the university, I help with my daughter’s co-ed baseball team,” she explains. “Otherwise, I am kept terribly busy between her gymnastics, jujitsu, and baseball practices.”

Completing not one, but two degrees is that much sweeter because she can share it with her mom, whose tenacity and fierceness of fight has helped her witness not only Kandance’s high school graduation so many years ago, but now two college graduations. “She is immensely proud of my achievements and my dedication to complete my goal while being a single mother,” she beams.

With each goal Kandance meets, she sees new possibilities on the horizon, and she knows she is far from finished. She still has career milestones in her sightline.

“With my master’s degree, I would love to become a human resource manager in the civilian sector of the Armed Forces,” she says.

She may even consider a doctoral degree, and she hasn’t made it New Zealand – yet. There are so many roads she could travel.

Finding where you’re meant to be is rarely a straight line, and Kandance’s twists and turns are a testament to her willingness to try new things, to jump in, and to ask herself, “why not” instead of “why.”

She hopes to inspire her daughter, now a 5-year-old, to show the same fortitude with her own goals. “I want to show her that just because life did not go as planned does not mean that she has to give up on something that she really wants to achieve.”
With all the shifts in her course, she wouldn’t change a thing.

“Earning my degree has helped me reinstate confidence in myself,” she says. “I am proud that I have chosen to continue this journey, even though there have been many years in between when I first began to now.”