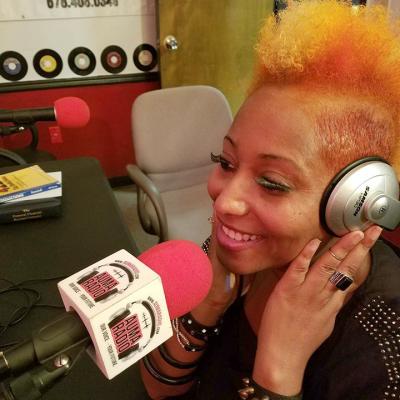 Being at Ashford* has challenged me to push harder and dig deeper.

Non-traditional students often take non-traditional routes through their careers, using their degrees to support an existing goal rather than as the foundation for a future job.

Oleathia Robinson is a perfect example of this type of student. An internationally recognized singer, songwriter, playwright, model, and actress, Robinson is building her career in the entertainment industry while simultaneously pursuing her Bachelor of Arts in Public Relations and Marketing at Ashford University’s* Forbes School of Business & Technology™.

“I’ve known I wanted to be a singer since I was 13,” explains Oleathia, who goes by the stage moniker Butta B-Rocka. “Let’s face it, you typically go to college to gain a skill, and for me the classrooms – at that point – could not teach me singing.”

It’s true, there’s no Ashford University program that could train Robinson to perfect her vocal pitch and stage presence. That, she achieved all on her own, working her way up the ladder in Atlanta’s booming music scene, winning “Best Female Vocalist” accolades in 2017 and back-to-back honors as “Atlanta’s Hottest Future Superstar,” and also gaining more than 13,000 fans on Instagram.

However, as Oleathia’s success grew, she came to realize there were vital business and marketing skills that would allow her to take more control over her career. Her Public Relations and Marketing program, for example, includes business communications training, marketing courses that could help her better understand and connect with her audience, and management classes that she could apply to her role as founder and Chief Executive Officer of a non-profit foundation called Artists Rock the MIC (Motivating Individuals in the Community).

“We are an organization that brings artists from all genres together that have joined forces to give back to the community,” she says. “Our primary focus is bringing awareness to, as well as assisting, college homeless students.”

Though Oleathia had already earned a degree in Computer Information Systems from another university, she felt she could accomplish much more, saying that “it was also very important to take courses I was actually interested in.”

When her mother, who graduated with honors from Ashford University, recommended the school, Oleathia saw it as a means of enhancing her off-stage marketability and business knowledge. At the same time, Ashford’s online format was an ideal fit for the single mother of two teenagers, both of whom are stars on the field and on the stage.

“My time is beyond crazy with studio sessions, rehearsals, shows, football games, photoshoots, etc.,” she explains. “With my hectic work schedule, I had to take online courses. There is no way I would have had time to commit to a classroom weekly.”

Being able to commit the right amount of time to school work is a challenge for every Ashford student, and although Oleathia admits it “gets hard at times,” she’s earned membership in the Golden Key International Honour Society and serves as the Service Director for Ashford’s Atlanta chapter. She’s a member of Alpha Sigma Lambda and Omega Rho Lambda Upsilon too. Oleathia is also a member of Ashford’s CHAMPS Peer Mentoring program.

“I was surprised, as I truly didn’t think going back to school was for me,” Oleathia says. “Being at Ashford has challenged me to push harder and dig deeper – it’s helped me define myself.”