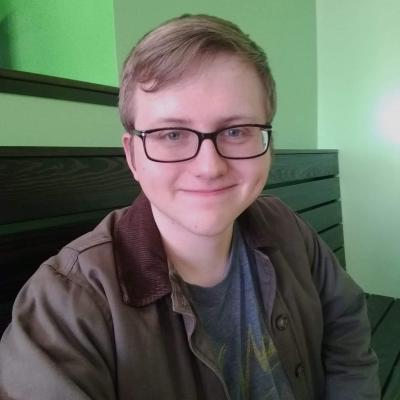 My life has changed drastically since attending UAGC. I’ve learned so many things and met so many amazing people.

For Daniel Ossewaarde, pursuing a college degree was a no-brainer. A high achiever since childhood, he started taking college courses at 15 years old and graduated from high school early with his sights on set on a university that would help him reach his full potential.

UAGC offered him that opportunity when he began to pursue a Bachelor of Arts in Business Information Systems.

“In September 2019, I moved away from my family in Florida to close the distance with my long-distance girlfriend of four years,” Daniel explains. “Plane tickets were getting expensive, and since I found a good job, I was able to take my school with me, online, to start the next chapter of my life.”

Daniel had never been one to shy away from an academic challenge, but moving to Kansas would put him in an unfamiliar environment. At 17, he found himself on his own for the first time, dealing with multiple responsibilities without the support of his parents.

“I had to purchase a car and get it registered while transferring my license, research and apply for an apartment, plan and pack for a move that would consist of a 20-hour drive, and mentally prepare myself for a brand new job,” he says. “The last thing I needed was for school to be inconvenient.

“Thankfully, it was so easy.”

UAGC offered Daniel a flexible path to earning his degree, while his class schedule and coursework provided some much-needed stability in his life.

Daniel says he had always been a focused and determined student, and his success would continue after enrolling at UAGC.

Daniel’s grades earned him entry into the University’s Honors College, which allows students with a GPA of 3.75 or higher the opportunity to take six exclusive courses that promote leadership, innovation, global perspective, and civic responsibility. Not only do these classes challenge Daniel on a new level, but he says they give him greater insight into a working environment that he’s still getting to know.

“One of the most important things that every class will teach you is how to communicate in a way that is professional and academic,” he says. “I have learned how to communicate effectively and impressively for whatever I’m trying to do.

“I am very proud of my academic writing skills and they’ve come in handy when writing company-wide emails.”

Daniel is on track to graduate from UAGC at 20 years old**, and his degree will open doors to some of today’s most dynamic career fields. Information Systems graduates enjoy steady employment in a tech-driven world, with many going on to positions as eCommerce developers, systems analysts, and enterprise systems managers.

For now, Daniel is focused on finishing school and unlocking his potential. He feels that he was “blessed” with the ability to learn quickly and is extremely passionate about learning more. UAGC, he says, has given him the opportunity.

“My life has changed drastically since attending UAGC University,” Daniel says. “I’ve learned so many things and met so many amazing people.”

He’s also hoping that his girlfriend, a senior in high school, will follow in his footsteps.

“She’s passionate about helping people in the medical field and wants to be a physician’s assistant later in life,” he says. “I really believe in her, and I hope I can inspire her to do well in school.”

** Due to UAGC, Daniel was able to enroll at an age younger than the standard minimum age requirement without having any transfer credits because he successfully completed the Student Success Orientation course.