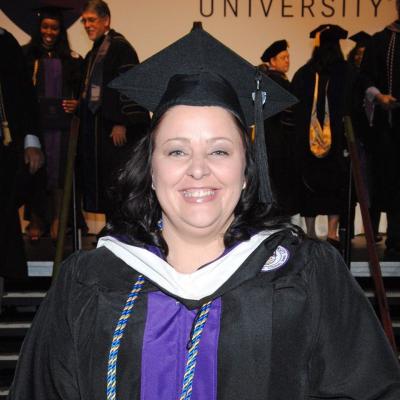 Without this knowledge, I would not have had the courage to start my own business.

None of us are on a permanent path through life. Even the slightest deviation from our current course can change the future in ways we could never predict. Often, it’s what you choose to do in these moments of interruption that define you, revealing your resiliency, character, and courage.

Carrie MacDonald was on a path that she thought would secure her future. Working as an emergency medical technician (EMT) in Yucca Valley, California, she had her heart and mind set on finishing paramedic school and moving up in her profession. That is, until an unexpected injury took her off her path at age 32.

“I was told it would be 5 to 7 years before coming back to work,” the single mother of two explains. “I decided to go back to school.”

Knowing that it would be nearly impossible to attend a traditional college and pay for a babysitter, Carrie sought out an online option that would make it easier to balance her priorities while she recovered from her injury. She eventually decided on Ashford University*, largely because the online format would allow her to take one course at a time, ensuring she wouldn’t feel overwhelmed, she says.

With her paramedic training on hold, Carrie enrolled in Ashford’s Bachelor of Arts in Public Relations and Marketing degree program in November 2011. The degree was a departure from her previous career, with courses focusing on business, marketing, project management, and writing. Despite some early personal struggles – Carrie’s mother was diagnosed with a very aggressive from of cancer – she was able to balance her priorities and excelled in school. She became a CHAMPS peer mentor and was even invited to join the Golden Key International Honour Society, a group comprised of high-achieving students in the top 15 percent of their undergraduate class.

College began paying off in more ways as Carrie realized there was a new path she could take to success. Drawing on her previous EMT training and her public relations education, she formed a consulting group that specializes in disaster preparedness, earthquake mitigation, active shooter training, and workplace violence training.

“Pursuing my degree has made an extremely meaningful impact,” she says. “Without this knowledge, I would not have had the courage to start my own business.”

“If I did not attend Ashford I would have an entry level position.”

After earning her bachelor’s degree in 2013, Carrie returned to Ashford to pursue her master’s degree in organizational management, a program that she believed would help her become a better business owner and leader.

Even after graduating a second time in 2015, she’s kept close to her alma mater, becoming the Golden Key secretary for her region and keeping in touch with the students she mentored while in CHAMPS.

“Attending Ashford was the best decision I made,” she says, adding she is grateful that the path she chose changed her life for the better.

“I still can’t believe I was able to finish both master’s and bachelor’s in about five years,” she says.