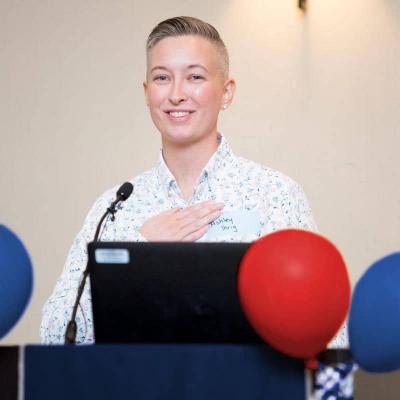 My biggest accomplishments include earning my education and marrying someone who believes in me and pushes me to my limits.

Ashley Ihrig has a love for learning, and it shows. A member of the Golden Key International Honour Society (an invitation-only membership that applies solely to the top 15% of university students), she decided to pursue her degree at Ashford University* to foster that passion for knowledge and to have something tangible to show for it.

She also knew earning her degree could enhance her job security and was excited for the new opportunities it might open up, including the ability to spend more time with her family.

When Ashley started her educational journey in 2014, she realized she was up for a challenge. As a U.S. Air Force military personnel specialist by trade, she is on call 24/7 and often jets off to different destinations around the world for work trips that can last up to six months. She also relocates often and knew some cross-country moves would be in store for her.

However, she had no idea that she’d also spend part of her time earning her Bachelor of Arts in Business Administration degree while temporarily blind.

After getting eye surgery that would cause her to lose her sight for about three weeks, Ashley knew she would need assistance to keep her education moving along during that time. In what she calls a “truly humbling experience,” she made the decision to call Ashford’s Student Access & Wellness Center to see what could be done.

Within hours, she received a phone call back. Together they came up with a plan that allowed her to continue earning her degree while providing her with the extra time she needed to complete her work while she healed. All told, it took about six months for Ashley to be able to look at computer screens for longer periods of time, but she kept at it and soon was back up and running.

Although Student Access and Wellness offered Ashley the assistance she needed to continue her education while impaired, she says the real secret to her success at Ashford was her wife.

Of course, Ashley acknowledges there were many times when she didn’t believe she’d make it, but she now hopes by accomplishing her goals she can act as inspiration for both her spouse and sister.

“I want to inspire my wife because she has done so much to help me stay on track,” she says.

Another key to her success, says Ashley, was making use of the Writing Center & Library religiously. She says she depended on them throughout every class and encourages other students to fully utilize these helpful resources.

“They are both useful tools that provide very detailed explanations for use,” she says.

Whether traveling for work, healing from surgery, or working on her assignments, through it all, Ashley’s never stopped singing. Although professional musician may not be at the top of her resume, there’s no doubt that she’s a talented singer and guitarist. During her time at Ashford, Ihrig estimates she’s sung the National Anthem more than 50 times at various events and all told has sung it about 500 times. In fact, she was even runner up for Ashford University’s fall 2019 commencement National Anthem singing contest and as a result, sang at the military appreciation event during the weekend commencement celebration in October.

When not singing, working, or studying, Ashely spends her free time volunteering to help those in need. In addition to Toys for Troops, she has helped at local soup kitchens and assisted with numerous military ceremonies.

Despite all these obligations, Ashley still has more goals to achieve.

Turns out Ashely Ihrig’s enthusiasm for broadening her education isn’t slowing down any time soon.