This places Elton Thomas among the minority.

Elton, who is legally blind, earned his Bachelor of Arts in Business Administration from Ashford University** in 2016. He’s not shy about this accomplishment. After all, it’s essential to his purpose in life: to do whatever he can to support and encourage people with disabilities to succeed.

“That, to me, is the highest priority,” he says. “As a person with a disability, I want to be an example, communicate with others, and help them.

“Having a degree allows you to influence the world,” Elton explains. “I’ve had ideas before and wanted to do things a certain way, but having a degree opens doors to people who will listen to you and take you seriously.”

Today Elton is utilizing his degree to make an impact at the nonprofit Lighthouse for the Blind St. Louis. While his official title is production supervisor, Elton prefers to be known as an “advocate for success.”

However, he wasn’t always positioned for such a role. In fact, it was while working at Lighthouse that he discovered Ashford. Elton’s boss had suggested that he would need more education to advance into management. Soon after, Elton enrolled at Ashford University.

“I didn’t like the idea that I’d gone as far as I could go,” he admits. 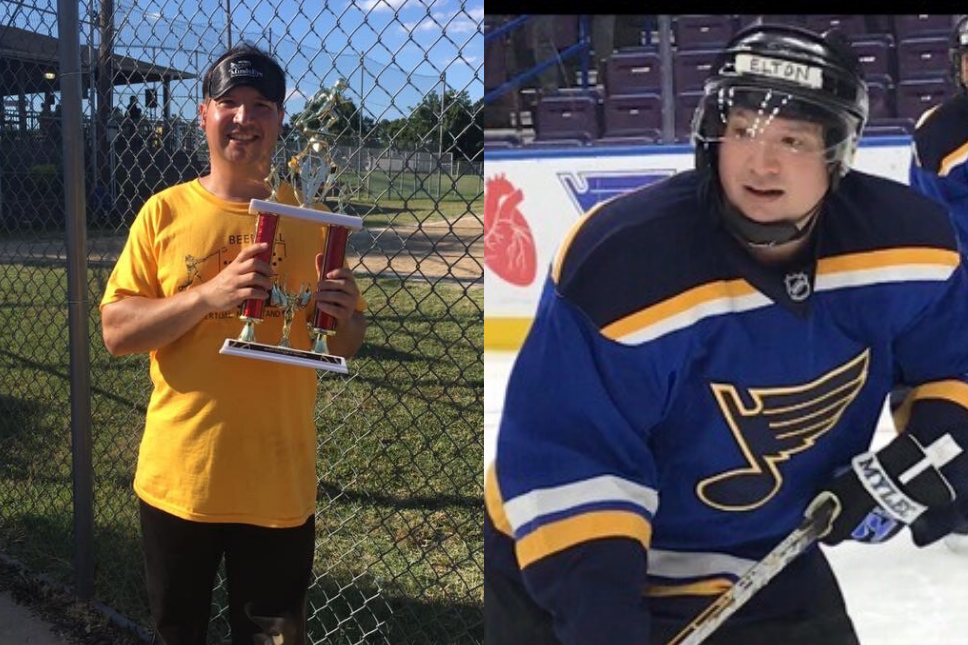 Left, Elton Thomas has been named an MVP of the Mindseye Ultimate Beepball Tournament; Right, Elton plays for the Blues Blind Hockey team at the Scott Trade Center St. Louis.

In order to achieve the management-level knowledge needed to advance in his career, he pursued a Bachelor of Arts in Business Administration.

Business classes, he explains allowed him to expand his critical thinking skills, apply logic to his decision-making, and empathize with those around him in ways he couldn’t before. In fact, his education earned him more responsibility at work and more opportunity to become involved in the community.

“When I got my degree, people and organizations were reaching out to me for ideas and assistance,” he says.

These experiences influenced Elton to form an advocacy group at Lighthouse that focuses on improving paratransit services in St. Louis, and he’s conducted disability training for the St. Louis County Board of Elections.

Elton says he was able to achieve these career and life milestones thanks in large part to Ashford.

That’s because Ashford University prioritizes accessibility for all students, he says. Understanding that visually impaired Americans face a labor force participation rate of 39 percent and an employment rate of 10 percent, according to the American Foundation for the Blind, the University established the Office of Access and Wellness to provide accommodations and support for students with disabilities. The department strives to foster equal opportunities through accessible educational programs and enhance awareness of individual abilities and contributions. Student resources include everything from electronic course textbooks and tutoring services to disability-related advocacy and advising.

Additionally, the online classroom allows visually impaired students to use a voiceover function within their textbooks, and lessons are embedded with audio files.

These benefits and resources are what drove Elton to pursue his degree at Ashford and ultimately graduate with a 3.99 GPA.

“That leveled the playing field for me, as far as having access to online materials,” Elton explains, adding that online learning removed the challenges that traditional colleges place on disabled students. “I didn’t need to request a publisher to make them for me, I didn’t need to hire someone to read the textbook to me,” he says. “Ashford eliminated the need for me to hire a notetaker.”

Elton isn’t resting his laurels on the one degree. Currently, he is pursuing an MBA at the University of Missouri-St. Louis, and he’s motivated to create opportunities for others to follow in his footsteps.

“The unemployment rate for people with disabilities is high, and there are qualified people who are blind,” he says. “To be able to get somebody who is blind a job is just a huge victory.