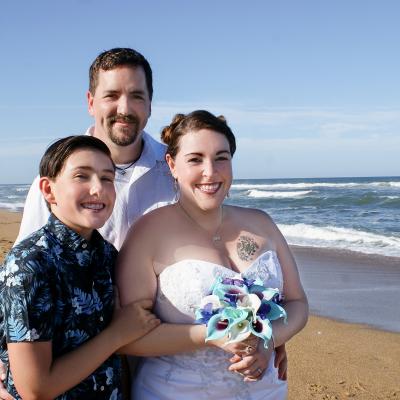 Nicole Chubb - Bachelor of Arts in Library Science and Media

I feel more fulfilled in life and have confidence in myself that I did not have before becoming a student. It’s different this time because I’m doing it for me.

When Nicole Chubb first enrolled at another college on a scholarship in 1998, she admits she had no idea what she wanted to be when she grew up. It was a story she would stick with for two decades.

After a year in college, she dropped out and started working in the hotel industry. Thirteen years and a divorce later, the single mother realized it was time to make some serious life changes for herself and her young son.

“I needed to make sure I would be around for him as long as he needed me, and I wanted to show him that being healthy was important,” she explains.

Over the course of eight years, she lost nearly 100 pounds and discovered a passion for dancing, running, and weightlifting.

“I never thought weightlifting would be my drug, but it is the best way to decompress that I have found,” she explains. “I love to run 5Ks with my family and I am a proud Rugged Maniac,” she said, referring to the annual 5K obstacle course mud run.

In order to ensure she was home in the evenings for her son, Nicole switched over to an office job at the largest taxidermy supply company in the world. Nicole also met and married the man of her dreams, and along with her son, he is her biggest cheerleader.

Despite her improved physical health, her job began taking a toll, and she suffered from debilitating migraines and constant stress. In 2016, her son commented on how unhappy she seemed and asked why she didn’t go back to school.

“When I started to tell him my standard answer, I realized that not only was I using that as a crutch, but asked myself what example I was setting for him by staying in a dead-end job that I not only hated, but that also was making me physically ill?”

However, there was a hitch. Nicole still wasn’t sure what she wanted to be when she grew up. A week later, that all changed while on a run with a friend who mentioned getting a degree in library science.

“I stopped short. I didn’t know you could get a degree to be a bookworm,” Nicole explains excitedly. “The next day, while at the job I hated, I looked up library science, and Ashford* was at the top of the list of recommended online schools for my degree.”

By the time she got home from work, Nicole was enrolled in Ashford and officially back on her path to earning her bachelor’s degree. The online classes were a perfect fit for her busy schedule.

“I think it would have been too intense to manage working full-time, my health and wellness path, and family time if I had to attend classes at a brick and mortar institution,” says Nicole.

As she entered her last year of school at Ashford, her migraines worsened, so, she ended up leaving her job to devote herself to school full-time.

“Looking at a computer screen was agony, but I had to push through,” she explains. “Once I was able to focus all my energy on my health, school, and family, the migraines nearly went away.” With that behind her, she improved her studies and even surprised herself with how well she was doing in classes.

“I never was a bad student, but my grades were never as good as they were then,” she says. “I worked my butt off to keep them that way, but I earned every A!” She was invited to join the Ashford University Honors College, made the Dean’s List, and is a proud member of Alpha Sigma Lambda honor society as well.

As part of the Honors College, Nicole joined a private Facebook community for top-performing students that was invaluable to her education.

“It is a place where we can connect with other students and offer encouragement if someone is stuck or lost. I love the friendships that I have made there,” says Nicole.

In October 2019, a little over 20 years from when she initially entered college straight out of high school, Nicole graduated with her Bachelor of Arts in Library Science and Media.

Now with her son nearly turning 14, Nicole hopes that he’s learned the value of higher education while watching her pursue her dreams. However, she also wants him to know that it’s OK to do it on your own timeline.

“I am glad that I found Ashford when I was ready to take the leap,” she says. “My confidence in myself has increased and because of that, I not only have a new outlook on life, but I have been treated with more respect by others.”