“I never would’ve imagined myself being where I am at today, even 15 years ago,” says University of Arizona Global Campus (UAGC) faculty member Dr. Emad Rahim. Although it’s a statement he makes humbly, it only takes a few minutes of hearing his backstory to realize just how far he’s come.

Today, he is a dynamic educator, award-winning author, TEDx speaker, university dean, and a successful entrepreneur. But his path to success didn’t begin with the most promising circumstances. In fact, most would not have survived.

Born in a concentration camp in Cambodia, Dr. Rahim spent the first year of his life surrounded by incredible levels of violence and brutality. His father was one of the millions of people tortured to death by the Khmer Rouge. His older brother starved to death in the camp.

His mother knew the only way they might live was to escape. The journey was extraordinarily risky, especially with a baby, but she knew it was the only alternative. She and young Emad joined a small group of refugees who fled on foot, braving treacherous terrain and the possibility of being captured again or murdered by the Khmer Rouge.

After many long days, they arrived at a refugee camp in Thailand. It was there where his mother met the man who would become Dr. Rahim’s stepfather, and a new threat secretly entered their lives.

Eventually, the family was sponsored and was able to emigrate to Brooklyn, New York.

Moving didn’t mean an end to their challenges. Their rough borough had its own share of violence, some of it even within Dr. Rahim’s own household.

His stepfather became increasingly abusive. Money was tight. As a student, Dr. Rahim had undiagnosed dyslexia and school was a struggle. One summer, he was caught in the crossfire of a gunfight and got shot in the leg.

As the level of his stepfather’s abuse increased, a teenaged Dr. Rahim convinced his mother to flee once more, and the family moved to Syracuse, New York. There, Dr. Rahim found an academic mentor who would help alter the course of his life.

Watch his documentary, “Against the Odds,” to learn more.

A Professor Who Cared

One of Dr. Rahim’s most life-changing moments occurred when he was in year four of a two-year program at a local community college. He was working two jobs to help support his mother and siblings and had an early morning class that he would go to after working an overnight shift.

It was always a struggle to stay awake in the class, and one morning, Dr. Rahim fell asleep.

“When I woke up, the class had ended, and my classmates told me that I had snored so loud that the professor had to stop lecturing,” he says.

Instead of waking him, his professor explained to the class how hard Dr. Rahim had been working, so they should let him sleep.

When he later went to apologize, his professor instead wanted to talk about Dr. Rahim’s learning challenges. He suspected the struggling student had dyslexia, and after a few quick tests, those suspicions were confirmed.

“The diagnosis was amazing,” he exclaims. “It was good news because once I knew that, I realized I could learn, just differently than other people, and he helped me access the right tools and environments where I could learn better.”

Inspired by the advice of his mentor, Rahim embraced the diagnosis and took control of his future.

“In a year and a half, I got my associate degree,” he recalls. “It was something I’d never felt before. It was like an adrenaline rush, and it made me want more. In two more years, I got my bachelor’s degree in community human service from SUNY Empire State College. As an adult student, everything I learned in class I was applying at work, and I could see what I was learning impacted my ability to solve problems, my communication skills were developing, I could articulate better, and as I became more educated, I wanted to do more.”

And after he achieved that first degree, a determined Dr. Rahim kept on going.

By 33, Dr. Rahim was recruited to be a dean at Colorado Technical University, and by age 36, he became Strayer University’s curriculum dean and faculty fellow at the Jack Welch Management Institute. Today, Dr. Rahim serves as the interim dean of social impact at Claremont Lincoln University in California, as well as the Kotouc Family Endowed Chair for the Project Management Center of Excellence, Program Director of Project Management Degree Program (MPM), and Associate Professor (Kotouc Family Professorship) in the College of Science & Information Technology at Bellevue University.

In his book Resilience: Killing Fields to Boardroom (2016), Rahim outlines his S.A.L.T. model of surviving, adapting, loving, and transforming as a way to overcome the struggles he faced. Relying on these principles — and using an acronym that aptly stands for a preservative — he combated prejudice, violence, and dyslexia, and rose from a challenged student to become a leading voice of empowerment in the online education and business communities.

Today, in addition to being a professor in the MBA program at UAGC, he is a professor and dean at several universities. Dr. Rahim mentors entrepreneurs, is a business consultant, and provides professional development training for world-class companies such as UPS, FedEx, Lockheed Martin, and more.

Most of all, Dr. Rahim is passionate about giving back to his community. He serves on multiple non-profit boards, including the Good Life Youth Foundation, which uses hip hop culture to help empower troubled youth and at-risk teens and teach entrepreneurship skills.

As a tireless activist in Syracuse, he advocates for families in need, the homeless population, refugee communities, and other underrepresented groups. Wherever he sees a need, he takes action. 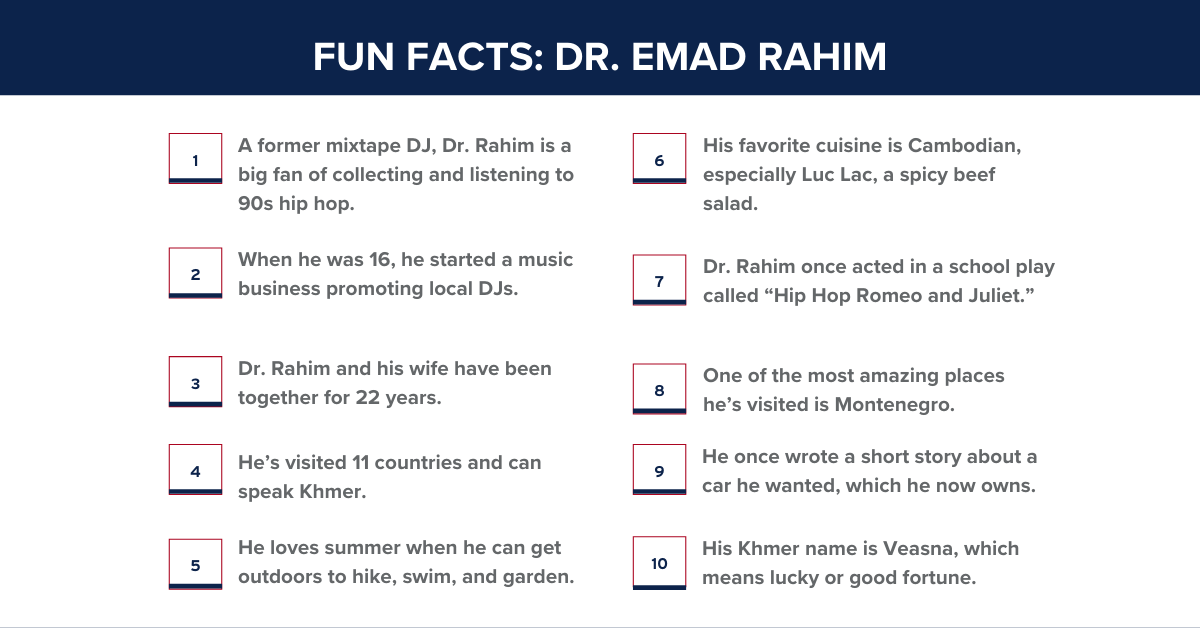 Getting to Know Dr. Rahim

We spoke in-depth with Dr. Rahim to gain a better understanding of his approach to teaching and to get his advice on coping with struggles and overcoming challenging situations.

UAGC: How do you feel your experiences have helped you connect to your students and others in the community?

Dr. Rahim: When people hear my life story or other stories that are similar to what they’ve been through, they find inspiration in that. They find motivation.

I try to use my story as a way to motivate and inspire others. I also use those moments to try and connect so those who I’m speaking to can find ways to share their story and find meaningful ways to build connections.

I think stories are what make us powerful. It’s the journey that we went through to get where we are today. That’s what makes us the person we are today and makes our accomplishments unique. It’s not about jobs or titles or education. It’s the perseverance and grit that we build up to become the person that we are.

UAGC: You’ve worked with students both at traditional college campuses and in the online setting. What do you find unique about teaching in the online MBA program at UAGC?

Dr. Rahim:  One thing that led me to UAGC is the non-traditional programs that help people accelerate.

Because we work with adult students, they tend to be more motivated. They know exactly what they want. They came to school with a purpose and are often juggling multiple responsibilities.

Our students are very focused on their career aspirations and their entrepreneurship desires. So, when it comes to the conversations we have in class, it’s not about philosophy or theory. It’s about practical knowledge.

UAGC: What advice do you have for entrepreneurial students who are afraid they may fail in either their business ventures or in their academic pursuits?

We also talk about the challenges that they have faced already as adult students, as single parents, as business owners, and know that the level of adversity that they’ve already overcome to get where they are provides a firm foundation for them to know that they’re strong enough to face future challenges.

If you’ve overcome so much already, you can do this. But the big difference is where you might have faced your other life challenges alone, here at the university, you have help. We have multiple services, multiple departments to reach out to, and dedicated professors.

Dr. Rahim: Often adult students look at the degree as the ending. They see that they’re here just to earn their degree. When they’re doing that, they’re not really getting the benefits of higher education.

It’s not the grades. It’s not the diploma. It’s the life-changing experiences that they could be involved in and immerse themselves in. When they’re here, they could create lifelong friendships, even online, by really getting to know their classmates.

Often, students forget about all these opportunities. When they go to traditional schools, they may be more likely to get involved because everything is right there in front of them on campus. But we have that here, too. I always make the argument that online it’s even more accessible because all of your classmates are working professionals.

What Can I Do with an Accounting Degree Besides Accounting?