For more than 230 years, the United States has existed as a democracy thanks, in part, to one of its founding documents — the United States Constitution. Created in 1787 and ratified in 1788, the Constitution provides the framework for America’s three branches of government and operates as supreme law of the country. It is a document that is always evolving and subject to amendments.

To celebrate its meaning, September 17 has been designated a day of observance and celebration – Constitution Day. This national day honoring the Constitution gives us a chance to reflect on it, celebrate it, and discuss it with friends and family.

Though the 2004 effort brought Constitution Day into the national conversation, the day was first observed in Iowa in 1911. In the decades that followed, the day became known as “I Am American Day,” a precursor to the aforementioned Citizenship Day.

Why the Constitution Matters
Finalized at the Constitutional Convention on September 17, 1787, and later ratified on June 21, 1788, the Constitution serves as a living document by which the United States functions. Though the lawmakers who signed it could not have imagined how different society would be today, the premise of the Constitution remains intact, evolving over the decades through the amendment process.

"We the People of the United States, in Order to form a more perfect Union, establish Justice, insure domestic Tranquility, provide for the common defence, promote the general Welfare, and secure the Blessings of Liberty to ourselves and our Posterity, do ordain and establish this Constitution for the United States of America."

That paragraph describes not just the intent, but the foundation for all articles and amendments that follow.

Articles of the Constitution
The Preamble includes seven articles. Here we offer a quick overview on each:

Article III of the Constitution establishes the judicial powers of the courts, notably the U.S. Supreme Court.

Article IV addresses “the states’ relations with each other, sometimes called ‘horizontal federalism.’” Among the topics included: how new states are admitted into the Union, the acknowledgement of differing laws between the states, and how persons charged with a crime can be transported between states.

Article V lays the groundwork for the amendment process by which the Constitution evolves.

Article VI, which includes the Supremacy Clause and No Religious Test Clause, ensures that the Constitution be recognized as the supreme law of the land and rejects the notion that any religious test be required for those serving in government.

Article VII deals with the ratification of the Constitution, declaring that it shall be valid once ratified by nine states. Why nine? According to Mark Graber, Regents Professor at the University of Maryland Carey School of Law:

"The point of nine was to get 13. Article VII may declare that the Constitution of the United States was the law of the land when ratified by nine states, but both the Framers and text clearly anticipated a union of all 13 states. Nine encouraged early ratification while preventing holdout states from extracting favorable concessions. The politics underlying Article VII highlights the importance of thinking about how constitutions are supposed to work, rather than worrying exclusively on what words meant at a particular time period."

Amendments to the Constitution
The following words by Thomas Jefferson are engraved on the wall of the Jefferson Memorial in the nation’s capital:

"I am not an advocate for frequent changes in laws and constitutions, but laws and institutions must go hand in hand with the progress of the human mind. As that becomes more developed, more enlightened, as new discoveries are made, new truths discovered and manners and opinions change, with the change of circumstances, institutions must advance also to keep pace with the times. We might as well require a man to wear still the coat which fitted him when a boy as civilized society to remain ever under the regimen of their barbarous ancestors."

The Founding Father and third President of the United States recognized that the Constitution should exist as a living document that changes over time, and that those seeking to enshrine it would only chain us to the aforementioned “barbarous ancestors.”

The Constitution currently includes 27 amendments, some of them – the First Amendment, Second Amendment, and Fifth Amendment, among others – are more well-known than others, but every amendment is vital to American democracy.

The amendments to the Constitution and the subjects they address are as follows: 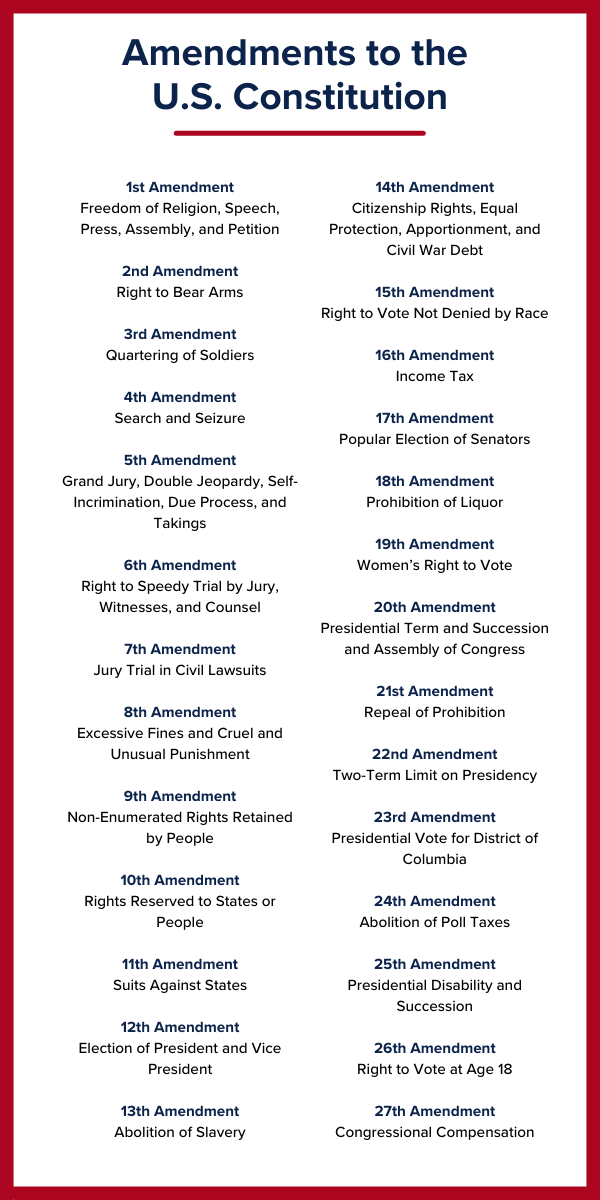 Constitution Day is an opportunity for Americans to become inspired by our shared history and acknowledge those who worked to advance our nation in its earliest days. If you are a parent or educator who grew up learning about the Constitution and its importance in school, you can also become a role model by passing along that knowledge to the next generation.

Here are some ideas for recognizing Constitution Day: