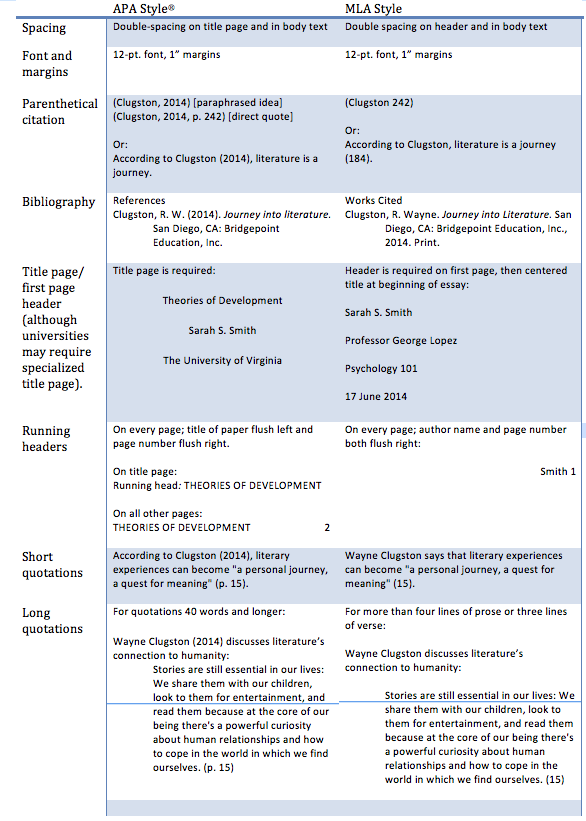 Once you start college and are given your first writing assignments, you may find that it’s not enough to write well. You must also format your papers using a documentation style. MLA and APA are two of the most common styles in academia. How are these documentation styles different, and where will you encounter each one?

APA format is preferred by the American Psychological Association and is typically used in behavioral and social sciences such as psychology, sociology, history, and communication. It’s also used in business courses.

MLA is the style preferred by the Modern Language Association, and it is used most often in the humanities, including literature, art, and theatre. At universities where the administration has decided to adopt just one documentation style across all courses, APA is often the style of choice because it is an effective style for multiple areas of academic study. Many online colleges and universities require students to use APA documentation style.

The good news is that APA and MLA share a number of similarities. An appropriate format for both styles is: double-spaced, with the font Times New Roman sized at 12 points, and one-inch margins all around.

A major focus for both styles is to ensure that your sources -- whether a book you quote from directly or a journal article from which you take an idea -- are clearly credited. In both styles, citing your sources involves two parts. First, you add a citation in parentheses where you use the quote or idea in the body of your text. Second, add a list of references at the end of the document.

There are, of course, some major differences between the two styles, which reflect their different origins.

* Different universities may have different requirements.