Sometimes in life, finding your independence is something you have to work for. Through trials, tribulations, and all of life’s tests, that’s exactly what Shiloh Wagner did. She worked toward something she could call her own.

Having already earned her bachelor’s degree and working now toward her master’s degree at the University of Arizona Global Campus (UAGC), she’s not taking any of it for granted because she has certainly worked for it.

Before, I thought failing meant everyone was disappointed in you. Now, failing doesn’t mean that at all. In fact, I don’t even call it failing. I just call it a new experience, or an adventure.

“I left an abusive marriage in September 2009 and felt lost and completely helpless,” she says. “I had never done anything on my own.”

So, the mother of three did what she needed to do to make ends meet.

“I started waiting tables and bartending to help support my three teenagers and me,” she recalls. “I was able to get my feet under me by living in low-income apartments and finding an old beat-up car I could purchase with my tip money.”

Being on her own was a new experience for Shiloh.

“I got married right out of high school, so I had never got a car loan by myself, never bought a home, never rented an apartment, nothing,” she says. “It was extremely scary.”

The end of her marriage served as a big wake-up call. “I needed to do more if I was going to be able to provide my kids a better life,” she says she knew.

She says she needed to prove to herself that she was capable of more.

In 2012, a few years after her divorce, Shiloh says she felt she had gained the confidence to move forward, so she decided to go back to school.

“There were other single mothers in the low-income housing I was living in at the time who were doing their online schooling through Ashford,*” she recalls. Motivated by her friends and intrigued by the ability to learn from home, she enrolled in the Bachelor of Arts in Human Resources Management program.

“We were able to talk to each other about the classes and help each other out,” she says she remembers of her support system of moms.

Still, as someone who had spent most of her time focusing on everyone but herself, Shiloh struggled to grant herself permission to focus on her personal goals.

It was difficult for her to find her footing as a busy, single mom.

“I struggled working two jobs, raising three teenagers, and doing school full-time,” she remembers. “I took breaks; I failed a couple of classes. It wasn’t easy.”

Shiloh even stopped going to school entirely for about two years.

Then, in 2014, Shiloh got the chance at a fresh start when her current husband moved from Utah to Pennsylvania, bringing his four young children with him. Having young kids in the home meant that Shiloh had to take a break from work, and in doing so, she created the space for herself to finish what she started.

In 2016, she re-enrolled in her bachelor’s degree program and was determined to finish it. She also had a supportive partner who lifted her up and pushed her in ways she had not previously experienced.

“He said to me one day, ‘If this is what you really want to do, you have to do it,’” she recalls. He took an active interest in her education, asking how her courses were going, taking care of household chores, and holding her accountable to making time for herself to pursue her goals.

Shiloh says she realized that her internal desire to care for everyone else was not only limiting her but also stifling their potential.

“Everyone else is just as capable,” she says she now understands. “I wasn’t giving them a chance to grow that way because I thought I had to do it all.”

As Shiloh continued her degree, she found a job at a healthcare company. She started in the billing department and continued to work on her degree.

She says she felt she was finally gaining some momentum. Soon, she was offered a position as an administrative assistant to the company’s general counsel and chief compliance officer in 2019.

“I felt like it was a step I needed to take to get my name out there,” she explains. “If you don’t, you’ll sit in the same chair forever.”

She wanted them to know that she would soon have a bachelor’s degree in hand.

Shiloh completed her bachelor’s degree in March of 2020. Just a few short months later, she was offered a position as a human resource compliance coordinator.

“This position meant a deeper dive into more projects within the same department I was already working in,” she explains.

As Shiloh was completing her undergraduate degree and moving forward in her career, the pandemic hit the U.S.

“I didn’t know what to do with my time,” she laughs. So, she enrolled in the Master of Human Resource Management program, and she is on track to finish in January 2022. As she has been working toward her master’s degree, she has also gained invaluable experience to take her career to the next level.

Shiloh’s upward trajectory can be attributed in equal parts to her own perseverance and determination, a new level of family support, and surrounding herself with people who inspire and motivate her.

“I chose to seek people of influence, strength, strong educational background, and comfortable in finances,” she says. She did it because that is what she desires for her own life.

I want single mothers — especially those who have been dragged down by unhealthy relationships — to see that they have it within themselves to succeed.

These influencers, which even include her two bosses, have helped her find her niche within the field and show her what it means to be a good leader.

“They’re both extremely smart,” she acknowledges. “It’s humbling to work for them.” She says they have shown her kindness and supported her growth and learning in big ways.

“I absolutely love the concept of protecting the company, protecting the people within the company, and being the liaison between the two,” she explains. “I had no idea there were so many areas of human resources. It’s a field you can go anywhere and do anything with.”

Now, Shiloh is enjoying working within the legal area of human resources. She’s learning about Equal Employment Opportunity Commission (EEOC) cases and digging into ways her company can make improvements.

“I always ask the attorney, ‘What could we have done differently?’” she says. Her main objective is helping to make her company even better and to learn from those around her every day.

While she has made great strides, Shiloh doesn’t forget who initially inspired her to pursue her degree – single moms just like her, many of whom have also earned their degrees and went on to careers in their respective fields.

“It was nice to see single moms come together and make something better out of themselves,” she affirms.

Remembering what it meant to her to have people she could talk to, she became a CHAMPS peer mentor to support new students. She helped students get to know the online environment, gave them tips for success, encouraged them to reach out to their advisors, and use the resources available to them.

“It brought back so many memories of when I first started,” she describes. “So much emotion comes back when you’re mentoring people.”

Following in her mother’s footsteps, Shiloh’s daughter enrolled at UAGC.

“She’s almost done with her first year,” she beams. “I felt so proud when she told her sister how proud she is of me and watching me at work and how that is what she wants. I want my kids to be inspired to do better always.”

When Shiloh completes her master’s degree, she will be the first in her family to earn a graduate degree. While the credentials are great, the shift in her perspective might be the best gift her education has given her.

“Before, I thought failing meant everyone was disappointed in you,” she explains. “Now, failing doesn’t mean that at all. In fact, I don’t even call it failing. I just call it a new experience, or an adventure.”

Shiloh wants everyone who has been in her shoes to know they can succeed, too.

“I want single mothers — especially those who have been dragged down by unhealthy relationships — to see that they have it within themselves to succeed,” she says. “I feel accomplished. I feel proud. I have a sense of direction. I feel that I am finally worth more than I have allowed myself to feel. I am not scared to speak up, to give my opinions, to ask questions, to use critical thinking, to even fail.”

I think my story could help women who feel they can’t finish school because their lives may have changed with children and/or work. I want those women to know they have the power to do anything they set their mind to. Life happens, and life can be cruel. But we are in control of our goals and how we reach those goals.

My family comes first, but my education is also important because I want to pass that on to my kids and show them that no matter how old you are, you can still do it, even while being busy.

I am not scared to speak up, to give my opinions, to ask questions, to use critical thinking, to even fail.

Kevin Daley: From Basketball to Business

Life definitely changed for me as a graduate. People respect me more and people are inspired by me in ways that I never thought possible; this time, it has nothing to do with basketball!

From Beauty School to Business: A Conversation with Dr. Charles Minnick 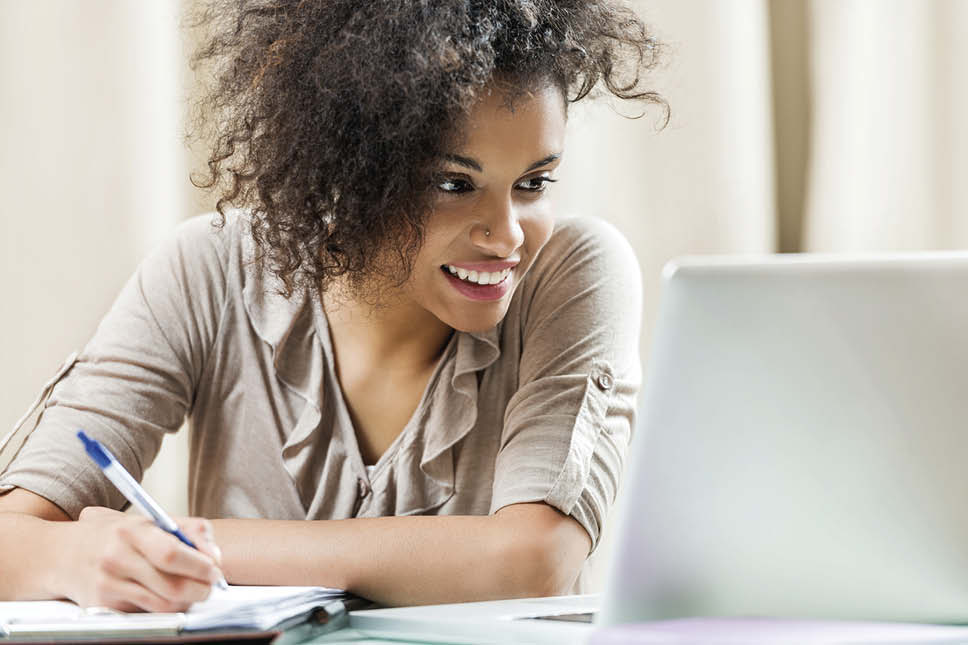