“When you are at your weakest, you have to be at your strongest.”

These wise words spoken by Dr. William Woods’ father have been a consistent reminder of how the lead faculty for the Master of Arts in the Organizational Management Program at the University of Arizona Global Campus should live his life and remain strong during some of his most challenging moments.

His father first shared this wisdom when Dr. Woods was a young boy growing up in Davenport, Iowa. It was there, at the young age of about seven or eight, where he would learn the value of hard work, first cutting grass (although barely tall enough to see over the push bar of the lawnmower) and then a couple of years later delivering newspapers, and later working in foodservice as a busboy, cook, and ultimately in management.

It was when he was older, however, when his father’s words would become most impactful.

In the mid-1980s, Dr. Woods relocated to San Diego, CA, where he got a job delivering furniture throughout the region.

Although Dr. Woods enrolled in a public speaking program while in San Diego, the college wasn’t exactly at the top of his to-do list. That all changed with a career-ending injury that entailed multiple surgeries and a difficult recovery process.

“Two things that helped me out at that point of my life were those statements made by my father, William Hayes Woods,” recalls Dr. Woods. “Those words helped me to have courage going through tough surgeries to repair my back and leg.

“The second thing that he said was, ‘You will never be happy until you go to college.’” 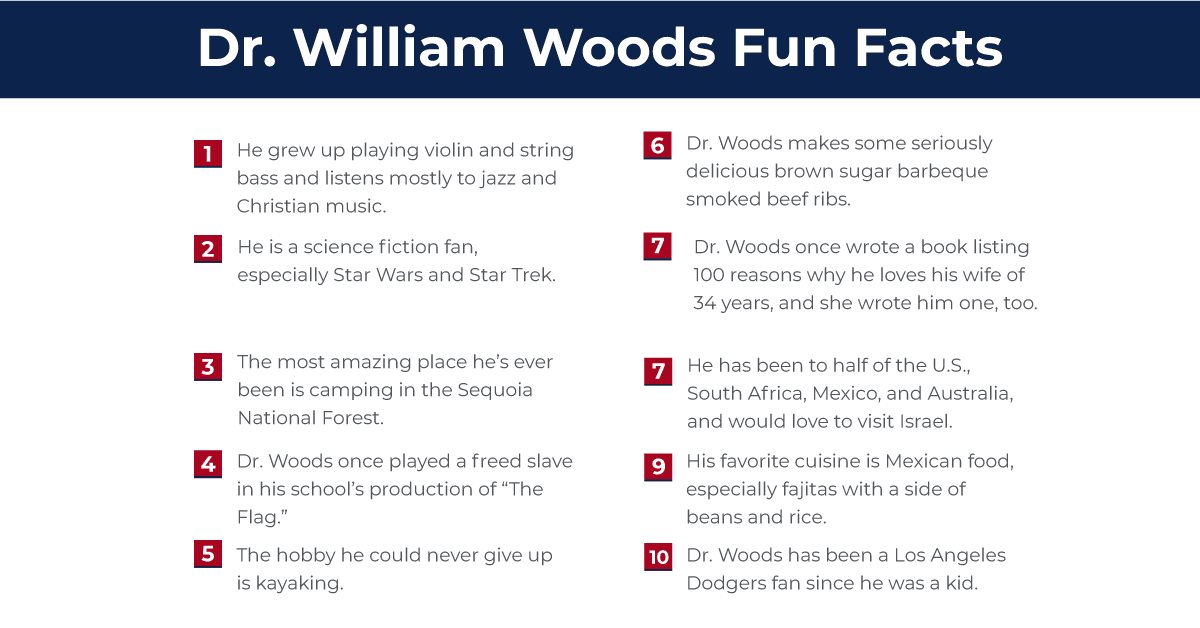 After his injury, Dr. Woods and his wife, Karin, made the decision to move with their growing family back to Iowa. Because of his injuries, he had difficulty finding work and ended up getting a job at the only place that would hire him: a landfill in Illinois — another state! In the middle of a typically brutal Midwestern winter, Dr. Woods had a realization, taking into account his father’s words about him having to be his strongest when he’s at his weakest. It was time for him to earn his degree.

While completing his bachelor’s degree at Saint Ambrose University, Dr. Woods discovered the public speaking courses he had taken began to pay off in unexpected ways. His professors had their eye on him and liked the way he could command a classroom. Without him officially applying for the position, the dean offered Dr. Woods a job as assistant professor and paid for him to continue his education and earn his MBA. Soon after, he joined Kaplan University and earned his Ph.D.

The man who started on his road to higher education from a dump in Illinois was now officially a professor.

After earning his doctorate, Dr. Woods joined the faculty in December 2005, and he’s been an instructor ever since.

One of his greatest honors was when two Alumni — Willy Kappie and Morgan Roth — asked him to officiate their wedding in Des Moines last year.

“I was Willy’s advisor and had him in a couple of classes, which is where he met Morgan,” he says. “I still have their wedding invitation on my bookshelf. It’s one of my big keepsakes.” 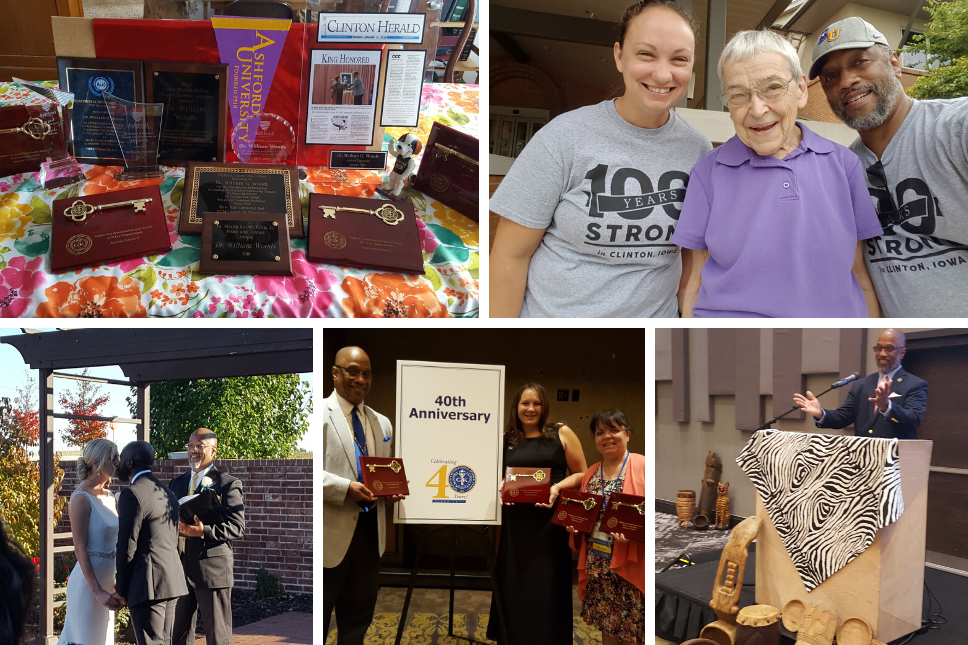 Bringing people together seems to be one of the things Dr. Woods does best. A firm believer in fostering kindness and helping others, Dr. Woods has used his connections through the Global Campus and his extended network to better the Iowa community through various service initiatives throughout the year. His students have collected food and clothing for economically disadvantaged families from as far away as Kenya, yet they also have provided more than two tons of food for a local Iowa homeless shelter.

One of his particular passions is the idea of pursuing peace amongst people of all beliefs and communities. In 2018, Dr. Woods authored the Iowa Peace Week Proclamation, which was signed by Governor Kim Reynolds. A year later, he expanded the movement by doing the same for the state of Wisconsin.

“Peace doesn’t wait,” he explains. “In reading and listening to the speeches of Dr. Martin Luther King, Jr., he said that it is always the time to do right. I don’t want Peace Week to be a political issue. I want it to be a life-confirming movement — genuine concern for one another to do what is right for whoever it is, wherever they are. We’ve got to change how we talk with each other, how we interact with one another.”

Here, Dr. Woods shares more about his philosophy on mentorship, adversity, education, and making an impact on his students. 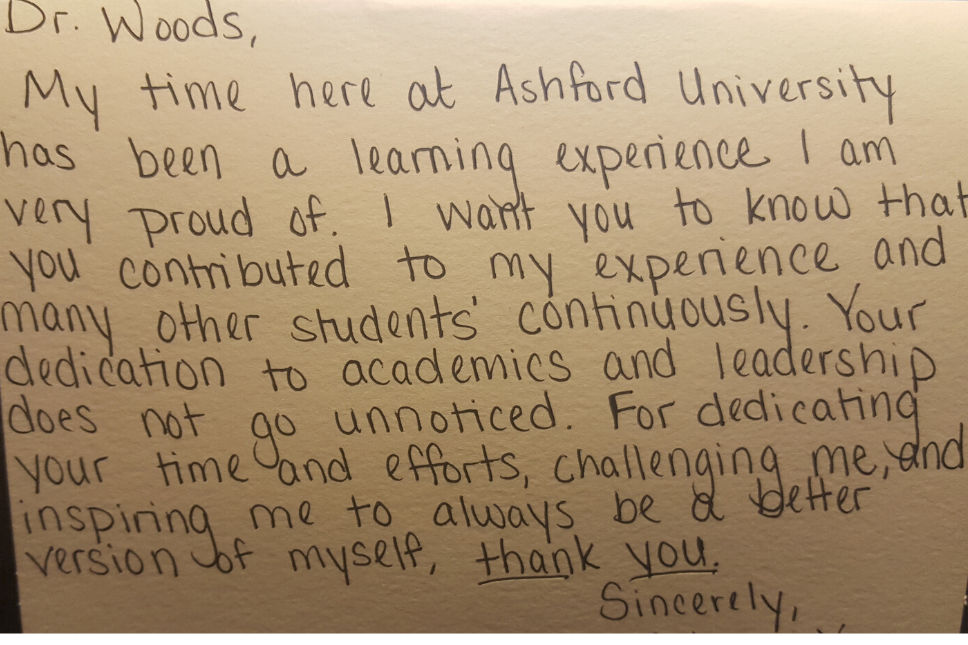 Dr. Woods has made an impact on the lives of many of his students, as demonstrated by this thank-you note he received.

Global Campus: Do you have a personal motto, and if so, what is it?

Dr. Woods: My motto is, “Give your best.” When I coached basketball, I always told the kids to give it their best. And they sure did. In fact, they concluded their last season together with the best record in the city.

Global Campus: Can you talk more about your work as a motivational speaker?

Dr. Woods: I love to touch the hearts of the audience that I am speaking to. That’s not always possible in all academic settings. However, in Pretoria, South Africa, last year, I talked to the audience about dedicating themselves to the service to others. During the presentation, I handed out roses. I then asked the over 200-member audience to show kindness and love to one another by passing the roses to the person sitting to their right, each telling the next person that they were loved and needed. Everyone was able to have those words said to them that day. A person in the audience surprised me. She wrote in my signature book, “You are loved. You are needed.” That is very meaningful to me. 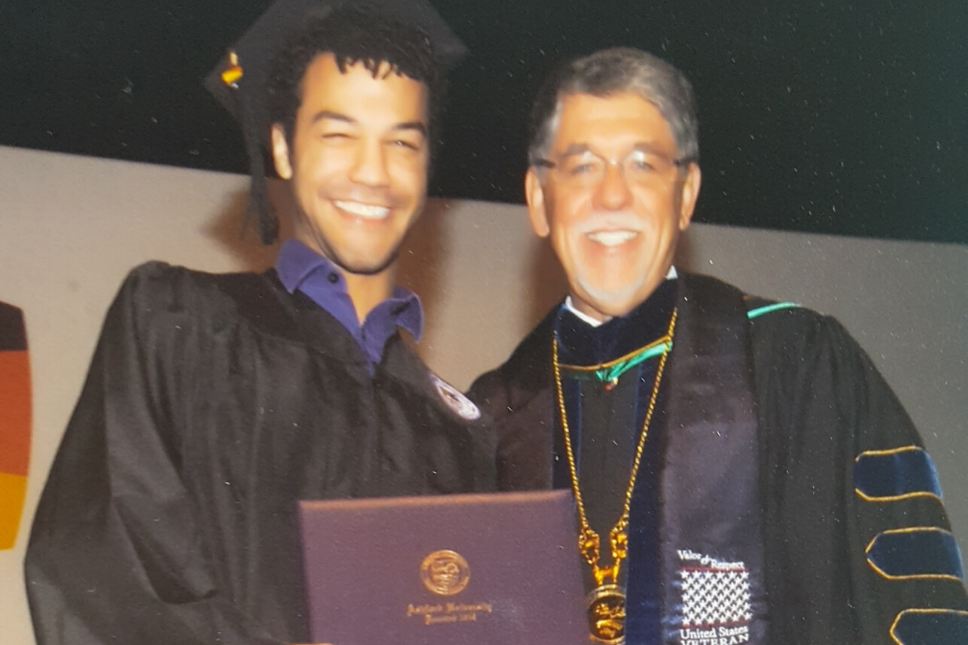 When it comes to graduations, one of Dr. Woods' particular favorites was watching his youngest son Quentin graduate from Ashford. As his third and final child to finish college, Quentin joins Dr. Woods’ Aunt Sherrie Woods and cousin Natasha Wyatt as Ashford alumni.

Global Campus: Can you share advice on how students can further their success along their education journey?

Dr. Woods: Before you start to struggle, develop your own successful network. Communicate with the people within your success network early and often.

Including your fellow students is important. I discovered this myself when earning my bachelor’s degree. I’d listen to the students who were most articulate and scored higher on tests. By networking with them, I, too, could be sure I was learning the right way. And, when we had discussion groups, I would try to listen to people who would not have the same bias or focus that I did. That gave me more vantage points to learn from.

The advisors that know the system are another important component. I put them in here because sometimes students may not talk to a professor, but will talk to one another or to an advisor. It can be hard sometimes for a student to say, “I just don’t know what I’m doing,” or they’ll say they’re afraid to ask a stupid question. To that I say, the only question that’s stupid is the one that doesn’t get asked.

And of course, include your professors in your support network. I encourage all my students to always ask questions of their professors, to call them, reach out to them. I have past students who still call me, and I’m always willing to talk to them. However, I remind them that I’m not willing to come into conflict with their current professors. I am here to support students and am in support of them working things out together with their professors.

Dr. Woods: Do not concentrate on the adversity. Concentrate on what you must do to overcome it. Sometimes that may take years. However, the victory will be your greatest reward. The power of quiet determination can often become an unstoppable force. 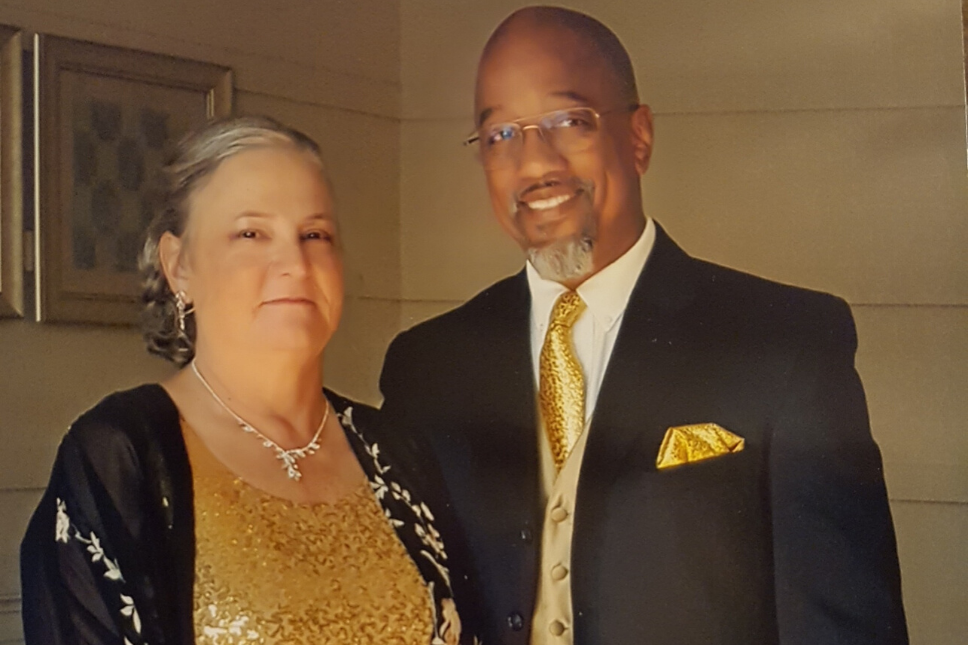 Global Campus: What are you happiest doing outside of work? How do you unwind and practice self-care?

Dr. Woods: I love being at church with my wife and other good friends. My wife and I purchased an 18-foot camper two years ago and have really gotten our use out of it. We enjoy doing so much together. We love spending time with our sons, their wives, and our grandchildren. They’re so much fun. And I love spending time with students and faculty, which is why I love being at graduation every year.