After 26 years, one of the most seasoned faculty members at the University of Arizona Global Campus will be retiring, putting an end to a storied career.

Were it not for listening to messages he says the universe sent to him back in 1995, however, Dr. Rob Engelson may never have had the opportunity to make such a profound impact on the school’s history.

First, there was the story in the Sioux City Journal about Mt. St. Clare College and how it had an opening for a choir director. What was unusual was that the article discussed a small school all the way on the other side of the state, he says, and it was on the front page of the largest newspaper in the region.

In another instance, the message was sent by way of a needlepoint catalog his wife received in the mail.

“Mount Saint Clare was a Franciscan institution,” he explains. “My wife gets this catalog of cross stitch patterns with Christmas stockings, and there is a pattern for St. Francis with the name ‘Bob’ across the top. It was the only time that we ever saw that pattern in that catalog. That was a little spooky.”

The most telling sign, however, may have been found in the address of the house they eventually would move into.

Dr. Engelson was one of 120 applicants for the choir director position and one of four to interview. Once he received the offer, he and his wife made two trips to look for houses. On the second trip, they came across a house for sale by owner.

“The last three digits of the phone number was our house number where we had lived in Minneapolis 14 years ago,” he laughs. “We said, ‘Okay, this is looking like this is where we are supposed to be.’ Twenty-six years later, and I’m still here.”

Music is in Dr. Engelson’s blood. From a young age, he sang in a choir (and even played the trumpet in high school). His mother sang alto, his sister was a music education major, and his father sang in a barbershop chorus. It’s no surprise that the self-proclaimed “choir geek” would pursue this passion and build it into a celebrated career.

Dr. Engelson holds a Bachelor of Arts in Music Education and German from Augsburg College in Minneapolis, a Master of Fine Arts in Choral Conducting from the University of Minnesota (where he met his wife, Thea, also a music and choir/voice connoisseur), and a Doctor of Musical Arts in Choral Music from Arizona State University.

He has conducted choirs ranging from 10 to over 300, as well as directed three community choirs (two of which he founded with his wife) in North Carolina and Iowa.

“Many of my most enjoyable moments come not only in front of a class, but also in front of a choir as we share the joy of learning and music-making,” he says.

At Ashford alone, he taught at least 13 different music-related courses. He’s also become somewhat of a “content expert” and has taught a wide range of interdisciplinary, liberal arts, and general education courses in the arts and the humanities, including uniquely designed classes such as Ideas That Changed the World, Politics and Popcorn, The Broadway Musical in American Culture, Shakespeare and Music, and more. All of this allowed him to tap into his other interests like history and film, he notes.

Then at once, it came to a halt.

In May of 2016, the University ceased in-person courses at its Clinton campus, and Dr. Engelson was certain his teaching career at the University was over.

“The first thought I had was ‘who is going to hire a 65-year-old choir director?’” he recalls.

Not only that, but like many who have a preconceived notion about online learning, particularly in its early days, Dr. Engelson was adamant that it wouldn’t be the right fit for him.
“I told myself that I was not going to teach online,” he admits. “It was a new trick that this old dog was not interested in learning.”

As quickly as his doubt surfaced, it was erased.

“When online is the only arrow in your quiver, you better shoot it,” he advises.

And shoot that arrow he did.

Dr. Engelson transitioned to teaching full time online as a “faculty of practice” (a position created specifically for him), and he has since taught over 100 online courses.

In December 2019, he joined the newly organized “Center for First-Year Experience” (since renamed the “Academic Engagement Center”) as a core faculty member teaching GEN 103 and GEN 499, the general education capstone course.

“Coming online and doing liberal arts courses was an easy transition,” he says. “I have had the opportunity and privilege to branch myself out and discover how my discipline connects and how all those threads run together.” 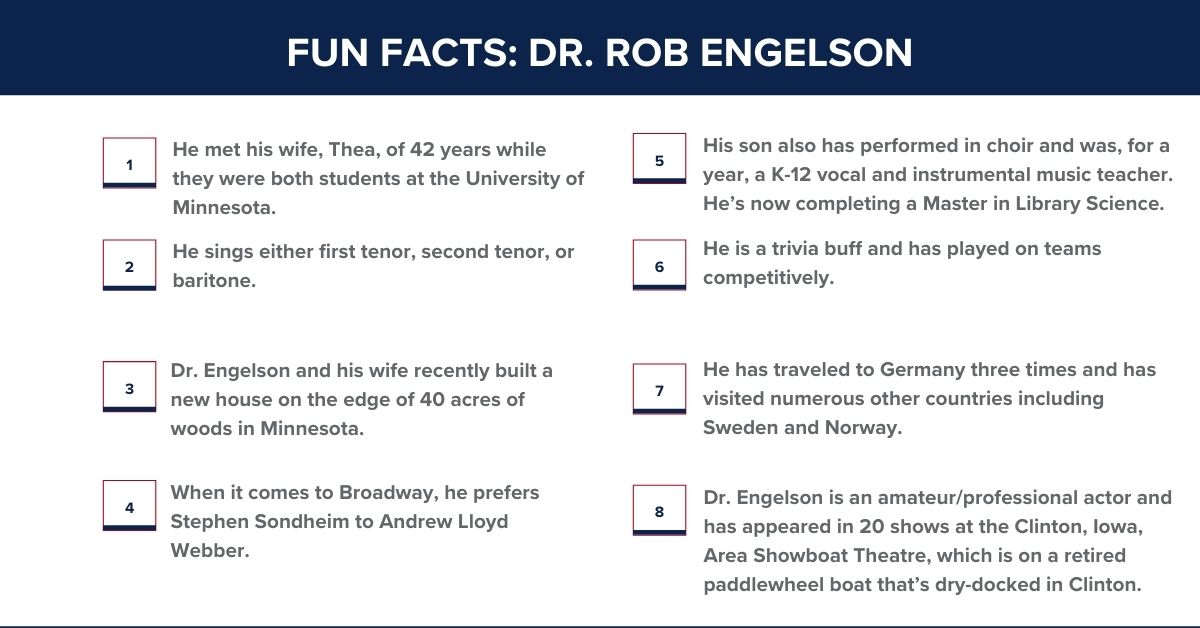 More than a Voice

Next to teaching, Dr. Engelson places great importance on service. In addition to serving as Music Department chair, he has been actively involved in committee work and governance activities throughout his tenure.

Over the course of 26 years, he has held more than 30 positions, including Chair Emeritus of the Ashford Faculty Senate, Director of the Clinton Campus Honors Program, Moderator of the campus Faculty Assembly, member of the Dean’s Council, and many more.

“I always tried to contribute in whatever way I could to serve the institution,” he acknowledges. “I must have had a trustworthy face, but I like to think it was also confidence that my colleagues had in me.”

All of this points back to his philosophy on pursuing your passion and growing in it.

If anyone has set an example of this, it’s Dr. Engelson. On December 31, he will conclude his 40-year streak as a college instructor and will retire to his newly built home situated on 40 acres of woods that has been in his wife’s family since the 1950s.

“Bloom where you are planted,” he encourages. “Wherever you end up, do the best you can to show and share your abilities. Share your talents and do what you can to make the place better. Hopefully, I’ve been able to do a little bit of that. Forty years is a pretty good amount of time! I’ve worked with some wonderful colleagues along the way.” 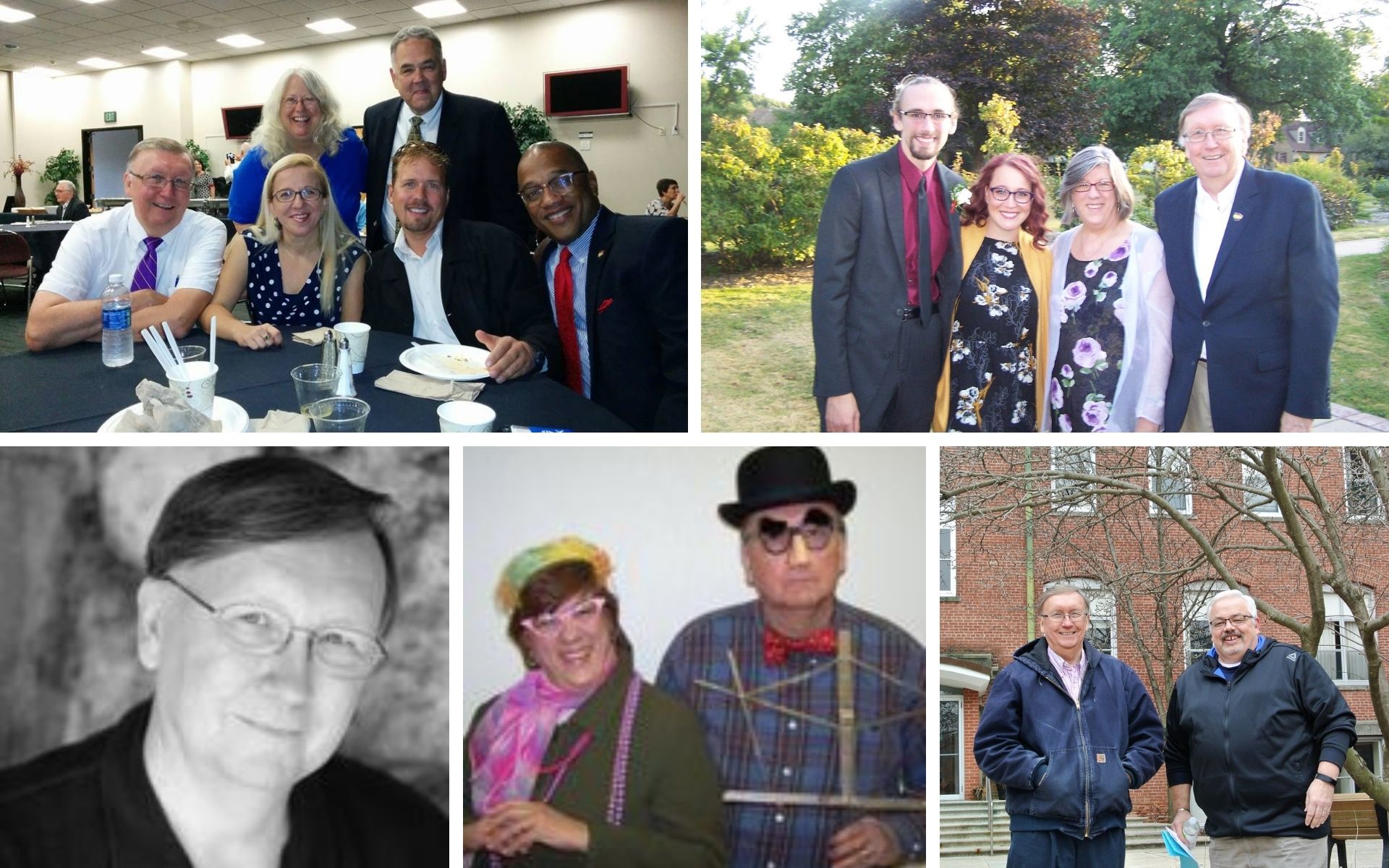 Getting to Know Dr. Rob Engelson

We recently chatted with Dr. Engelson about his passion for music, teaching, service, and his advice to students and colleagues. Read on for more insights into this favorite UAGC faculty member.

UAGC: What advice do you have for those struggling to “find their passion”?
Dr. Engelson: Keep an open and receptive mind to possibilities, and don’t be afraid to ‘stretch’ yourself – for some, it takes time to find that passion for a particular subject or area, but trust your instincts and let yourself experience whatever comes your way.

UAGC: Why is setting goals so critical to success?
Dr. Engelson: It’s important to have some kind of “game plan” in mind, whether it’s short term or long term, regarding what you want to achieve.  And the goals you set for yourself need to be realistic and, ultimately, achievable. For me, at the start, my goals were fairly simple: to be a college choir director and teacher. When that happened, my goals then became a little more focused – to be the best I could be at whatever I was doing, whether in the rehearsal room or the classroom, and to serve the institution in positive and productive ways; then, as I gained more experience, it was more “technical” things like be promoted, get tenure, maybe take a sabbatical, etc.  The point is to be willing to set goals for yourself that may be challenging but possible.

UAGC: What wisdom can you offer to first-year students or those returning to school as adults after not having been in school for a long time?
Dr. Engelson: It’s ok to be scared a bit – whether it’s a first-year student or someone returning as an adult, there is a fear factor at work in terms of entering a new and challenging environment. Just know that there are people who are willing and happy to help them make the transition – IF students are willing to seek that help. I’ve had so many online students who lament the fact that they didn’t visit the Writing Center earlier in their academics to get help from the writing tutors; all those people in academic services are valuable resources for students in terms of making their academic journeys more enjoyable and rewarding.

UAGC: How can students tap into their potential?
Dr. Engelson: I think it starts with what they enjoy doing – do they like reading, do they like the arts, are they a math whiz, do they love history, etc.  Once they have an idea of that, then they “do it” – get as many experiences in those areas as possible to see if it’s something to pursue as a vocation or career.  Then consult teachers, career counselors, and people in those areas to learn more about the “ins and outs” – those things beyond just the enjoyment level, such as vocational possibilities, work opportunities, technical aspects, etc.  If they find they have a “passion” for whatever it is, then pursue it and become the best you can be in that area.

UAGC: How do you define success?
Dr. Engelson: Put very simply, I think it comes down to doing what you love and loving what you do; as is often said, if you’re doing something you love, you never “work” a day in your life.  In the “grand scheme of things,” if someone can say that, to me, they’re a success; any honors, awards, or recognition beyond that is icing on the cake.

UAGC: Why is learning important at any age or stage in life?
Dr. Engelson: Well, from merely a practical standpoint, our world continues to change so rapidly in terms of technology and other aspects, it’s imperative that we keep up and keep learning, if only to keep our heads above societal waters.  But from a humanistic standpoint, everyone’s goal should be to be a “life-long learner” – to continue to learn, to read, and to challenge ourselves to be as well-informed in all aspects of our lives, whatever the discipline may be.  That will be scary for some people, but for others it’s a lot of fun!

UAGC: What will you miss most about teaching at UAGC?
Dr. Engelson: The pleasure of engaging with students in whatever the course material may be (for me for the last year or so, GEN 103 and GEN 499; before that, courses as part of the former Liberal Arts degree; before that, any number of music or interdisciplinary courses) – to help them through struggles with understanding and to see the progress that they can make when they apply themselves and engage with each other in the communal learning process.  Equally, I’ll miss the regular contact with colleagues through Zoom meetings or email chatting; they are such talented and committed folks and “collegial” in the best sense of the word.

UAGC: What parting words do you have for students and colleagues?
Dr. Engelson: For students, I say: ‘Jump in with both feet, get to know as many of the faculty as you can, and always turn your work in on time!’ For faculty and staff, I say, ‘Maintaining a sense of humor is an important thing, whether it’s in the classroom or dealing with colleagues. I tell people that Germain Greer once said, ‘You’re only young once, but you can be immature forever.’ Well, immature is not necessarily a positive word, so I decided to substitute it with ‘whimsical’. I have found that having a sense of whimsy has quite often served me well throughout my career. The other thing I would say to my colleagues is actually another quote, this time from Bob Hope: “Thanks for the memories.” Those memories are long-lasting and full of gratitude.